Lining up your shot so that the bowling ball travels down the lane on your intended path, begins in the stance on the approach. This is known as pre-setting your angles. Angling your shoulders, hips and feet in the stance towards your target is a necessary fundamental all bowlers need to know to achieve consistency in their game.

In this premium video, Scott Pohl, owner of On Track Pro Shop, demonstrates how a straighter player and power player pre-set their body angles to achieve the desired launch angles for their style of play. Choose which player best resembles your game and incorporate the advice in your next practice session.

When playing straighter, angles in the setup need to be slightly open and squared to the target. The bowling shoulder needs to be in line with the target, hips square, knees slightly bent and the slide foot slightly in front of the other. All body angles are facing the target down lane. 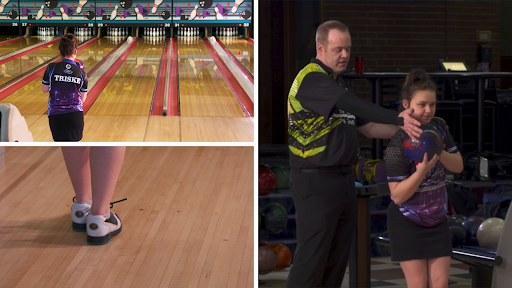 The finish position angles need to stay the same as the angles used to set up in the stance. Shoulder and hips square to the launch angle with the slide foot facing down lane. 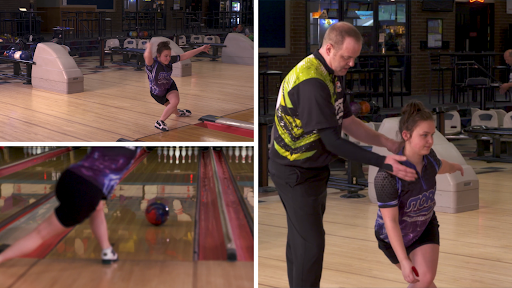 In order to have the body angles match the desired launch angle which is more right to left than the straighter player, the power player needs to open up the shoulders, hips and feet to accomplish the desired ball path.

In the stance, keep your feet pointed straight with your slide foot ahead of the other. Then open your shoulders and hips up by slightly twisting them back until you are aligned with your target.

The finish position angles need to open up the same as the angles used to set up in the stance.

The image below illustrates the shoulder angles in the finish position of the straight and power players. 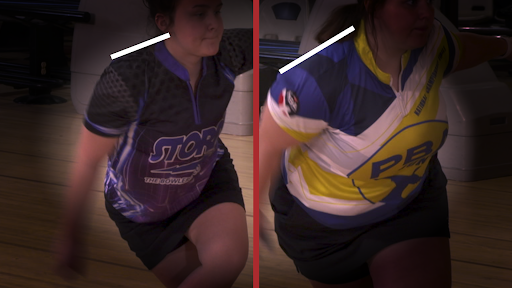 Check out Identifying “Bowling Launch Angle with Kegel’s Torch” and “Should I Fix My Drift on the Approach?” for more ways to gain consistency in your bowling game.