Sign in to view full video or become a member now!
Duration: 1:31

Timing is a series of events that happen throughout a bowling shot. Think of it like a guitar player in a band. If he or she plays their solo at the wrong time, the song suffers. But when played in time, with the right notes and tempo, that song sings.

From the stance to the finish position, timing is what brings everything together to create a fundamentally sound bowling shot. In this premium video, Scott Pohl, owner of On Track Pro Shop, explains how timing is created in the two-handed bowling game.

The bowling ball starts moving typically on the third step or even later for a two-handed bowler utilizing five steps on the approach. Traditional bowlers using a five-step approach get the ball started on the second step.

In both cases, if the ball start is early or late, your timing will be off and you will either lose leverage and watch your ball skid past the breakpoint and struggle to make the turn towards the head pin or you will pull the ball, resulting in a hit through the nose or even cross over.

The swing for a two-handed bowler is not as long as a traditional bowler and this creates later timing and more leverage at the release. The height of the backswing should have your elbow bent around 45 degrees with the elbow just above your head and the ball shoulder high.

Keep the balance arm shoulder and elbow directly in front of the ball-side in the downswing. As the bowler slides, the forward trunk angle nearly doubles from the 45-degree position at the top of the swing to a maximum of 90 degrees at the point of release

The two-handed release occurs past the slide foot’s ankle. Traditional bowlers typically release the bowling ball parallel to the ankle. To import the most possible revolutions on the bowling ball, the fingers have to travel the farthest distance possible around the ball, in the shortest time.

Two-handers’ fingers start the release past the south pole of the bowling ball, which is one of the reasons they have a higher rev rate. 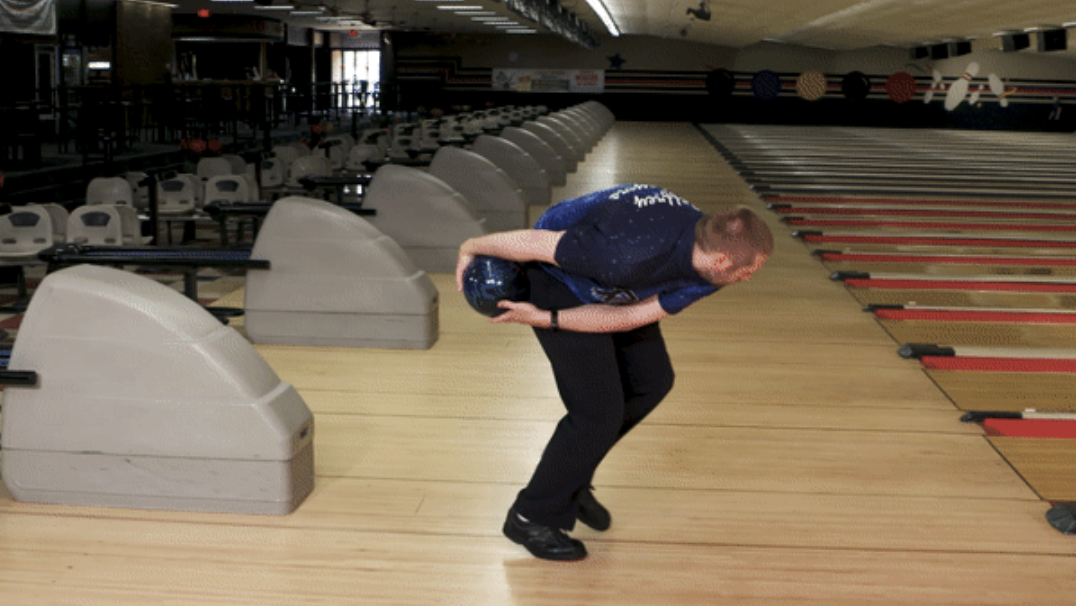